While I’m on the aviation kick, check out this incredible story about an F-15 landing sans .. something terribly important. I can’t vouch for its authenticity, but my friend Chris said he saw the same story on Discovery Wings, which doesn’t prove it, but lends some credibility.

Also, the new Adam A500 is on its third test-flight and is looking to be shaping up nicely. The A500 is Adam’s foray into the world of twin-engine centerline thrust, an odd but intriguing design.

Most planes with twin engines locate them on the wings for practical reasons: structural and fuel system simplification, vibration/noise-dampening, crashworthiness. The downside is the asymmetric thrust you have to deal with in the event of an engine failure.

Centerline thrust (CLT), in turn, is an arrangement of engines, one in front of the other, in a push/pull configuration. The result is a much more stable aircraft in the event of an engine failure.

The idea isn’t new: The Germans experimented with centerline thrust in their Dornier Do 335 test fighter during World War II, but it was never produced. Cessna was the first to utilize CLT configurations in production aircraft, most notably with the lackluster 337 Skymaster. The Skymaster was plagued with safety and engineering problems (some refer to its CLT configuration as “suck ‘n’ blow”), but nonetheless it still has its fans, and sold 2300+ models. 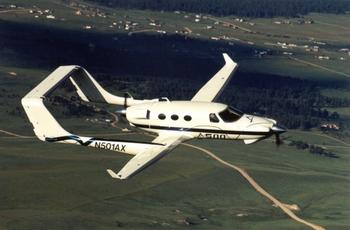 Adam is hoping to salvage the prospect of CLT in a production airplane with the A500. The engineer commissioned for the design of the A500 is none other than Burt Rutan, who was responsible for the design of the world-famous Voyager aircraft, which completed the first non-stop, non-refueled flight around the world.

Check out the specs and reserve yours today. In fact, while you’re at it, uh.. reserve one for me, too.