Light Trucks and The Rest Of Us

There’s an interesting article in the NYT this morning about Subaru’s move to tweak its Outback model slightly so that it meets the federal regulations for “light trucks” rather than passenger cars.

Why? Because the federal restrictions for “light trucks” (which most SUVs qualify as) are much less stringent, allowing Subaru to expand the application of turbochargers, which reduce fuel efficiency, as well as other tweaks, like a tinted rear-window, which aren’t allowed on passenger cars.

Aside from the obvious implications that lessened fuel efficiency has on our economic (and environmental) situation, there are safety issues to consider. Subaru claims that the changes are “technical” in nature, and will retain its marketability as an alternative to an SUV:

Subaru, a unit of Fuji Heavy Industries, says the new Outback, which will make its debut next month at the Chicago auto show and go on sale this spring, will retain its not-an-S.U.V. image because the changes being made are technical in nature. What customers will notice will be the new Outback’s glossier look, executives said. Further, the base model will be more fuel efficient than the current version.

Tim Hurd, a spokesman for the National Highway Traffic Safety Administration, a branch of the Transportation Department, said a vehicle either met the specific technical requirements of being a light truck, or it did not. “They aren’t a judgment call,” he said.

What sort of impact would increased ride-height and ground clearance have on the safety of a vehicle?

To begin with, the NHTSA has found that the propensity of a vehicle to rollover after running off-road is directly related to its ride-height and wheel-base. “Taller, narrower vehicles, such as sport utility vehicles (SUVs), are more likely than lower, wider vehicles, such as passenger cars, to trip and roll over once they leave the roadway.” 1.

But an even greater problem than rollover resistance is one that is often overlooked, or completely unknown: vehicle compatibility. The NHTSA defines “vehicle compability” as “the ability to create conditions making roads, roadside hardware, and vehicles well matched to safely transport motorists.”.

There are many factors considered by the NHTSA to encompass compability, including “the energy management and encompassed by the relative mass, geometry, and structural stiffness characteristics of the collision partners” during a vehicular collision. There is also a growing problem of headlight glare due to severely mismatched ride-height between passenger vehicles and LTVs. Since 2001, the NHTSA has received over 4,000 complaints regarding LTV headlight glare, requesting initiatives to address the problem. This is an issue I have addressed before.

To quantify the effects of growing incompability between cars and LTVs, the NHTSA initiated several studies recently. Using data from the 2001 FARS (Fatility Analysis Reporting System), the NHTSA came to some startling conclusions about the impact of LTVs on fatality in vehicle collisions: 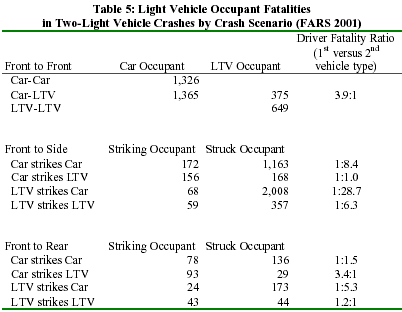 Further, this ratio was calculated for specific LTVs for front-to-front impacts: 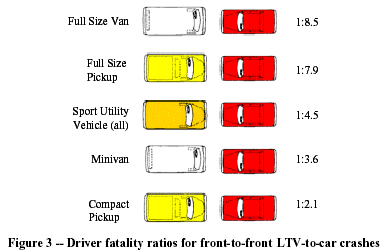 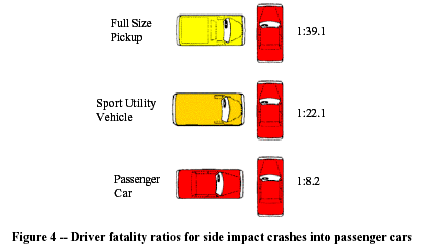 I think from this it’s clear that the trend of “light truck”-ification we are seeing in the automotive world has dire implications for the safety of those of us driving a car.

So what’s the answer? If your answer is “buy an SUV”, I can’t say I blame you (okay, yes I can). As indicated above, as a driver of a 1987 Nissan Sentra, in an accident with a full-sized pickup, I am 4 times more likely to die than the driver of the pickup. But my financial situation and my requirements for a vehicle hardly justify the purchase of an SUV. It seems we’re at a tipping point of sorts (no pun intended). As vehicular compatibility decreases with the popularity of LTVs, the rates of fatality are increasing. It seems some sort of standard is necessary, and that is precisely what the NHTSA is currently working on. They are proposing several initiatives: