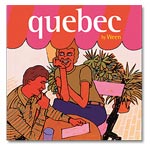 I picked up the new Ween record this week. I gotta say, I really like it. This is exactly what I needed in a record right now. It doesn’t take itself too seriously. It isn’t “tongue in cheek”, despite how many idiotic reviews of it you might read that insist that it is. It’s just a good collection of songs.

It isn’t, though, a very coherent album, by comparison to their earlier stuff. Some of the songs seem really out of place. This is, no doubt, in response to the “this is a browner album” sentiment. For years, people have been clamouring for a return to the Pod-era type material, with tape-manipulated voices, and more “whackiness”, in general. They seem to have obliged, on this album, but songs like “So Many People In the Neighborhood” just sound stupid and gratuitous in line up against songs that show a much different Ween.

The first track, “It’s Gonna Be a Long Night”, opens with enough charisma to give the Moistboyz a run for their money. The rest of the album is pretty mellow, by comparison, with a little bit of everything thrown in, showcasing what Ween has learned over the past 10 years. Dean Ween’s guitar playing is showcased again and again, and it’s nice to see that he’s getting better and better. Production quality is nice.. The album sounds great, without the overproduced sterility of White Pepper.