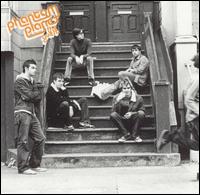 I admit that I, as probably most everyone did, only first checked out Phantom Planet because their drummer, Jason Schwartzman, played the lead in one of my favorite movies, Rushmore. But, they surprised me by bringing some pretty solid pop rock songs with great production that would make Ric Ocasek proud.

Their first album, Phantom Planet Is Missing was a very obvious freshman effort, with many of the songs showing their lack of refinement, but despite this, the album was very listenable. The Guest offers a more refined Phantom Planet, without sacrificing any of their pop sensibility.

Among my favorite tracks are the opener, California, which is a pretty straightforward track that is very reminiscent of their first album; Lonely Day, which just plain rocks; and Turn Smile Shift Repeat, which is a very sophisticated, well-arranged song with a sort of Radiohead-ish haunting feel to it, without being too overbearing and pretentious.

All in all, I love this album. Presently, I can’t stop listening to it. Check it out, if you know what’s good for you.